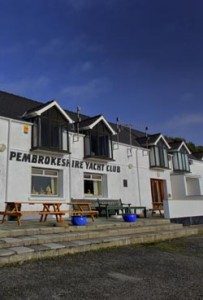 Records show that competitive sailing existed on Milford Haven Waterway more than two hundred years ago but it was in 1923 that the first sailing club was formed. The early meetings of the Pembrokeshire Yacht club were held at The Great Western Hotel, Neyland but the club soon moved to The Kings Arms, Hakin Point, Milford Haven and remained there until the acquisition of six derelict cottages at Gelliswick Bay in the 1950s. Through members enthusiasm and efforts the cottages were restored and converted into what became the basis of today’s club house and facilities.

We discovered a 1924 County Guardian article for a ‘smoking concert’, which is well worth a read and just gives an idea what a sense of community the Club has for the whole of Pembrokeshire.

How many people realise that when a Yacht Club was first formed in the harbour after the First World War, the six cottages on the site now occupied by the club at Gellyswick were occupied very happily by local families. According to records, competitive sailing has been going on in Pembrokeshire for two hundred or more years, but the first Yacht Club was officially formed in 1923 with the late Sir Hugh Thomas of Castle Pill as Commodore. Meetings took place from time to time at the former Great Western Hotel at Neyland.

By the late 1920s the club had moved to Milford and a headquarters established in a back room of the Kings Arms at Hakin Point from where racing took place. Progress had been made. Someone once said, some-what unfairly, that what we call progress is the exchange of one nuisance for another nuisance. But in the case of the P.Y.C. this was not so

The club gained strength and support, and in 1925 the International 14ft class of dinghy was adopted for racing. There were other classes of yachts based there and on Regatta days even the suitably-decorated fishing smacks would join in the racing.

The 1930s saw a locally-built class of 12-footers appear on the scene, followed in turn by Scottish one-design 14ft. dinghies. For the benefit of yachtsmen who have to budget to a yardstick, these cost just £45. Such were the good old days…

Throughout the thirties other clubs were being formed in the county and the original function of the P.Y.C. at Hakin, i.e. to represent all Pembrokeshire sailing, faded. The club accepted this and itself  became a purely local club no longer controlling all harbour events.

In 1938 a coffin-maker by the name of Williams of Aberystwyth built, at the cost of £65 each, what was to become the P.Y.C/s best-loved-boat, the 18ft. O.D. class, for a number of local owners. Because of their almost unlimited crew capacity, these yachts proved very popular especially with young sailing enthusiasts who had not aspired to a boat of their own.

These 18-footers were never reefed. When the wind freshened another body or even two or three were shipped on for extra weight. It was not unusual in those days to see youngsters lined up along Hakin Point praying for a good strong breeze. They all knew that these yachts could be, and were, manned by anything up to a dozen in rough weather. They were also used for ferrying everything but the kitchen sink to beach picnics and bottles of beer were kept cool and passed from yacht to yacht on a line in the sea. These fine boats finally disappeared when the club decided to adopt the G.P. 14 as the standard racing dinghy. Nearly all the first batch of G.P.s were built by members and friends in an enthusiastic do-it-yourself effort in a shed at Goosepill.

Then fate took a hand and changes on the Board of Milford Dock Co suddenly meant the withdrawal of all the facilities which had been enjoyed at Hakin Point.

The size of the fleet was not yet up to target, money was short, and the club’s committee was faced with a difficult decision. At that time Conduit House was on the market. It seemed a possibility as a club house but the finances involved were beyond the club’s resources and a closer inspection showed that the cost of repairing the house and making the beach capable of being used by dinghies seemed insurmountable.

Even to the resourceful members of the P.Y.C. the future seemed a little bleak. Then Milford Council came to the rescue of the almost marooned sailors by offering the club a lease on some old, condemned cottages at Gellyswick. The response from club members was immediate and overwhelming. Unbelievably, carpenters, masons, electricians, ditch diggers and plasterers sprang into action from the ranks. If they were not artisans they happily acted as tradesmen’s ‘mates’. That they were yachtsmen wearing different hats was unimportant. Wives of husbands who had hitherto been unable or unwilling to mend a fuse at home watched in disbelief as those same men pulled down walls with alacrity and dug ditches with determination. Within a few months the place became habitable and the P.Y.C. moved in. Admittedly there was still a lot do but the first part of the compound was laid and the 1959 Regatta took place. The P.Y.C. had arrived at Gellyswick.

Since then it has grown in membership each year, the process of gradual enlargement, re-building and decorating being continued. The club received a compensatory amount from Amoco when they proposed building their jetty off Gellyswick. This enabled them to expedite the programme of loan bond repayments to members. The balance of money was invested.

Dinghy racing continued to expand through the seventies with the addition of cruiser racing growing in popularity at the same time. The size of the fleets has varied from generation to generation and also the types of boats sailed. These days the dinghies fleet includes Blazes, RS400’s RS600’s, RS Fevas, Toppers and Optimists plus some old favourites such as GP14 and Mirror. With the cruiser fleets remaining as a handicap fleet.

The boat parking has also provided storage for fishing and diving boats. The latest addition to the clubs activities is the formation of a longboat rowing section. This is proving to be extremely popular and the club has 4 of its own boats which race in the Pembrokeshire league as well as further afield.